Gregory Papadakis: a ship repair broker for all seasons.

From Poland in the 1980s to Vietnam in the 2020s, ship repair broker Gregory Papadakis has a knack for cracking new markets open.

Like so much else in life, Gregory Papadakis’ career as a globe-trotting ship repair broker began by accident.

In 1988, one year before the Iron Curtain fell, a Greek client’s ship was damaged in the Baltic and had to go for emergency repairs at the Gdanska Stocznia Remontowa yard in Poland.

Papadakis, then a 34-year-old shipbroker, liked what he saw.

“The quality of their work was good,” he said. “All they lacked was management.”

Sensing an opportunity, he and his brother, Andrew, took over representation of the Polish shipyard and began touting its merits to London-Greek shipowners.

“Poland was bound to rise,” Papadakis recalled, in an interview from his office in Athens. “Shipping markets were very bad at the time and shipowners were looking for yards to do business cheaply.”

Convinced by the two brothers and lured by low costs that were a fraction of what Western European yards were charging, major names such as Lou Kollakis and the Laskaridis brothers began sending their ships to Stocznia Remontowa for repair.

The Polish employees, from Communist Party bosses to dock-worker labour unionists, welcomed them with open arms. Stocznia Remontowa had previously been a repair base for Soviet ships, whose owners paid notoriously late and badly. Greek clients, by contrast, paid promptly and in US dollars.

Under Papadakis’ watchful eye and with the technical assistance of his Greek clients, the yard was soon doing wonders. Papadakis reminisced about how Stocznia Remontowa tinkered with reefers’ floors and ceilings to make space for more pallets to be carried on board.

“It was a big success, and it’s due to brokers’ credit that they opened up that market,” he said.

Poland delivered something of a blueprint for how to spot new and not immediately obvious places to do business.

Going into new markets is good for brokers.

“In established markets, brokers are less powerful. It’s in new and difficult ones they’re needed and thrive,” said Papadakis, who has headed his own company — Papadakis Shipyards Brokers (PSB) — since 2005.

With 15 employees in its Athens headquarters, PSB maintains a network of associated offices from the Dominican Republic to Hong Kong.

Part of their job is to serve clients that look for emergency repairs in off-track areas, such as the Caribbean and West Africa.

Like Poland in the 1980s, shipyards in those markets usually have the know-how it takes but lack management and investment.

“In such places, one needs personal connections, from the general manager down to the foreman and the worker,” he said.

“You also often have to deal with unusual requests, like inserting force majeure clauses for lack of metal sheets or for bad weather.”

The latest market to have attracted the Greek broker’s attention is Vietnam.

As Chinese yards filled up before coronavirus and became more expensive and difficult for owners to deal with, Papadakis was looking for alternatives.

SHIP REPAIR IS NOT ENOUGH

Gregory Papadakis has diversified into other marine service markets as well. He has set up a team of 20 Romanian technicians and fitters to perform afloat repairs in areas of the world where shipyards are often fully booked or not available, or uncompetitive.

Another PSB team began deploying crews to shipowners that cannot send their own personnel to take delivery of newbuildings from Chinese yards, as well as attending superintendents for dry-docking repairs.

The biggest aspiration is to expand into newbuildings, brokering the conclusion of deals and supervising construction on behalf of owners.

Decarbonisation is especially challenging. “Owners must be guided carefully on placing their asset investments for sustainability,” he said.

Vietnam, strategically located alongside the busy Asian shipping lanes, seemed a logical choice. Ship repair is a labour-intensive business and Vietnam has an ample labour force. Rattled by an international newbuilding slump, local yards also have every reason to diversify.

PSB took over the exclusive representation of Dung Quat, a yard with a graving dock measuring 380 metres by 86 metres, which can fit the biggest of ships.

To monitor operations on site, Papadakis set up a local company. He called it “Perama in Vietnam”, a tongue-in-cheek allusion to the famed ship repair zone near Piraeus.

However, going from shipbuilding to ship repair is not easy. There are still problems. Prices in Vietnam are higher than they could be, as patronage is still boosting some yards’ overheads.

Having little access to foreign capital markets, Vietnamese yards find it hard to borrow dollars and often ask for high advance payments of up to 50%.

“If an owner doesn’t know a yard, he feels a bit nervous about committing that kind of money,” Papadakis said.

He has managed to mitigate such problems and is in touch with local officials to cut through red tape. He said having a good yard is of little help if it takes too long to issue seamen’s visas and clear spare parts at customs.(Copyright)

Ballasting operation is crucial for safe and efficient shipping operations. At any given time,  35000 ships are en route on the water of the Earth and more than 3000 species are being transported in their ballast tanks. The IMO BWM Convention regulations came into force on 8 September 2017 which directed industry players to the implementation of the BWMT evolved into the trend in the shipping industry, outstanding enhancements were achieved. But there is still a way towards 2024 with new standards and challenges are inevitable.

Mr. Gregory Papadakis, Μanaging Director of PSB & CO. S.A., was one of the speakers at the webinar. The topic of his presentation was the “Comparison of various BWMS and highlighting their advantages & disadvantages”.

Please watch his full presentation and the conference at the below video.

Headway Technology Group (Qingdao) Co., Ltd. had her USCG approval updated on May 05, 2020, in which the holding time of 2 hours was approved by USCG. This update recognizes ‘Headway OceanGuard BWMS’ as the only one who can discharge water 2 hours after single disinfection, with the shortest holding time.

Headway is one of the pioneers to research, develop, manufacture and sell BWMS. She strictly complied with rules and regulations of USCG and IMO revised G8, during the whole process of land base and ship board tests for USCG TAC application. With this updated USCG TAC and the previously obtained new G8 approvals from major classification societies and flags like ABS，BV，CCS，DNV GL，LR, Headway BWMS shows the ability to be operated in every port of the world, without concern of compliance.

The updated USCG approval matches the BWMS which was initially USCG approved in 2018, and this makes the 2 hours holding time valid immediately. There is no any amendment required in this regard, so it can save time and expense for shipowners and operators. Operator of the vessel can just ignore the impact from Headway BWMS, thanks to her single treatment, salinity as lower as 0.85 PSU and holding time of 2 hours.

Headway believes even a good product also need to constantly enhance the research and improve technology, in order to meet demands from the changing market, and expectation from authorities and clients. As a professional and intelligent supplier of advanced marine equipment, Headway has been always upholding the spirit of enterprise as “service, innovation and win-win”. The recognized 2 hours holding time, will significantly help Headway to provide better products, more satisfied service and comprehensive solutions to clients.

Recently, Headway Technology Group (Qingdao) Co., Ltd. finished the additional tests for 2-hour holding time for USCG type approval under the supervision of DNV GL. All tests were done in 100%-130% rated capacity of OceanGuard® BWMS. With the completion of those tests, OceanGuard® BWMS now offers the shortest holding time in the market.

According to Headway’s BWMS approval project team, all pipelines are required to be cleaned between ballast and de-ballast operation, and 2 hours reached to the ceiling of the shortest interval. Furthermore, Headway mentioned that some ship operator has been asking if the “Not Applicable ” holding time means “no limitation”, it is recommended to confirm with USCG to avoid unnecessary trouble during PSC inspection.

Since there was no change of BWMS during additional tests, all delivered OceanGuard® BWMS will be able to achieve 2-hour holding time in fresh, brackish and marine water without any modification to the system.

PSB & CO. S.A. is pleased to announce that is now the official exclusive representative of ‘Dungquat Dockyard (DQS)’ in Vietnam.

‘Dungquat Dockyard (DQS)’  is conveniently located in the middle of the Vietnamese coastline, in Quang Ngai province, and provides the following facilities; 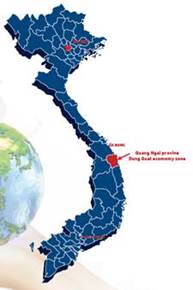 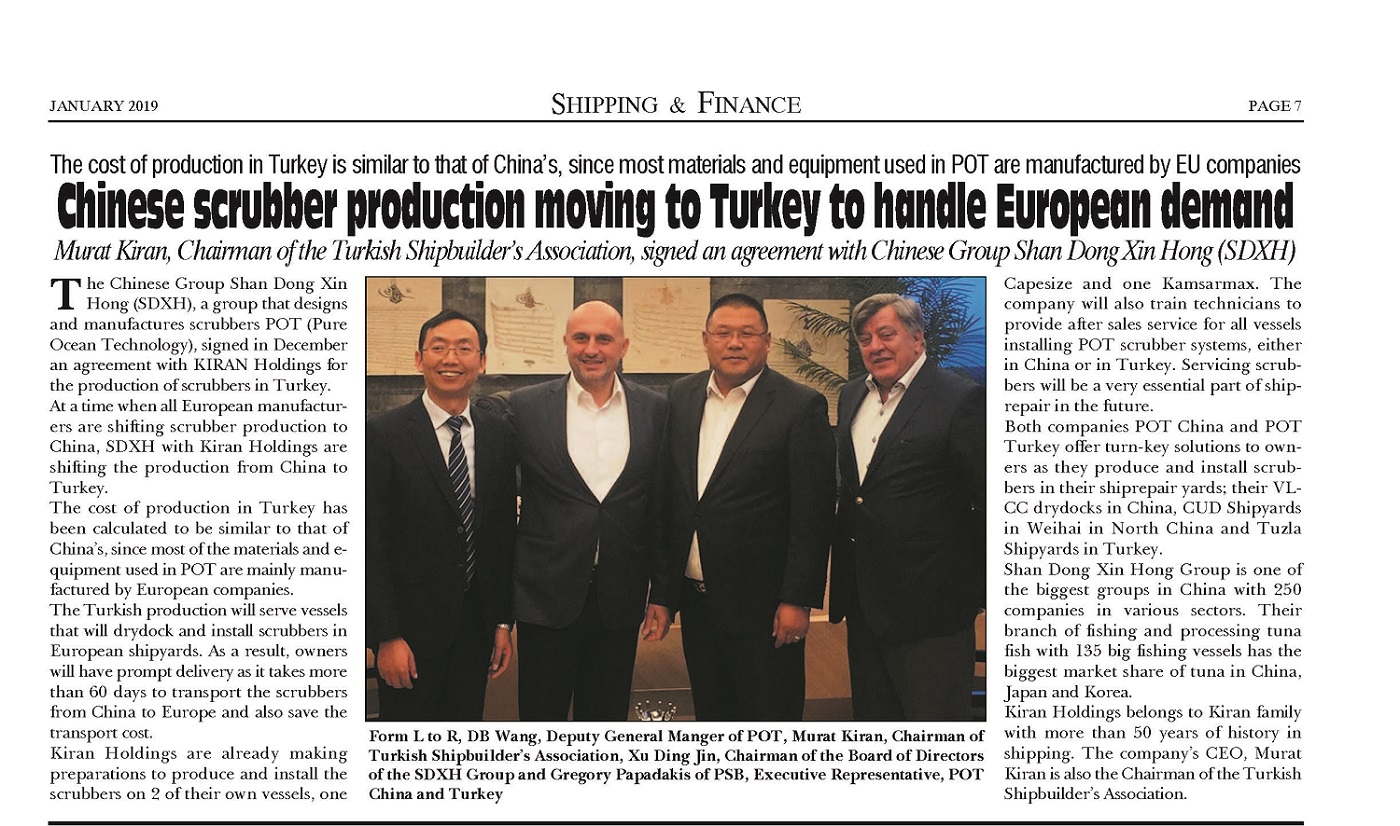 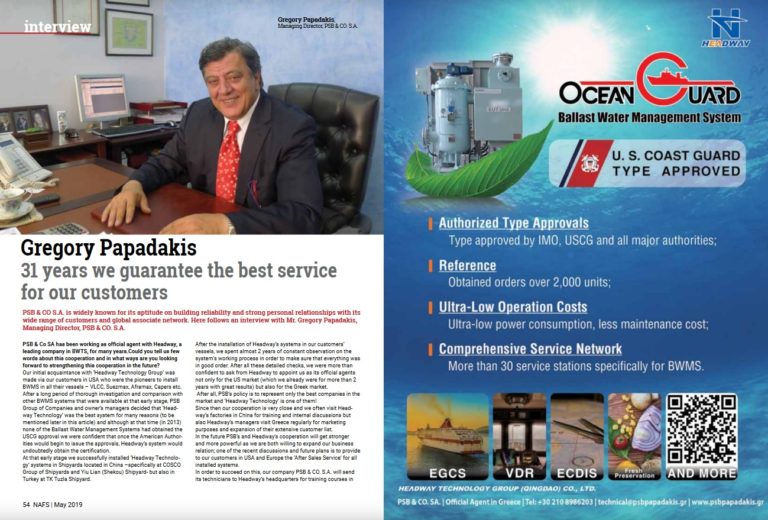 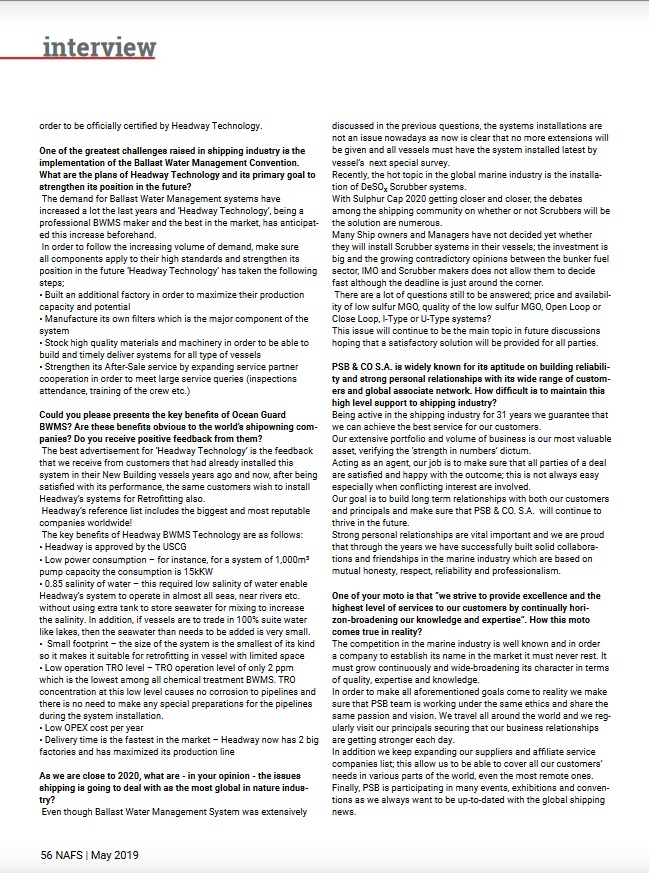 Headway Technology CO. LTD. ,makers of BWMS, held a seminar on June 2019 at Athens Marriot Hotel, in order to present to the Greek Market their system and also analyze the system’s functional details 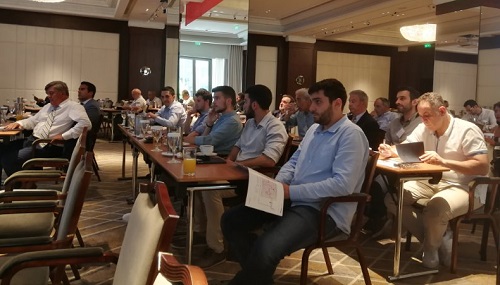 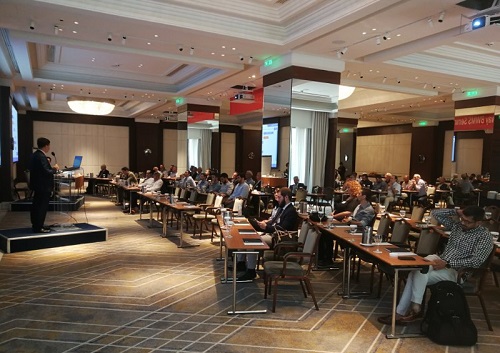